Science is just another religion, but amongst the mainstream it is doing the best job at it.  I shall not only make this claim, but also back it up.

Religion, as I claim to define it, is when things congregate to understand and improve their mortal condition.  Now the definition of improve here will always be up for debate, so I will define it as however you want to understand it.  Regardless to how you define it, science is doing it better than mainstream religion and here is one way how.

In the bible of science,  in the book of "The Origin of Species", on page 122 of the chapter "organization tends to advance", in the top of verse 6, the God of this particular sect of science, Charles Darwin, chastises one of his disciples, Herbert Spencer.  Disciple Spencer says in a claim to knowledge regarding the answerless question of how differentiation of physiological labor could have arisen from such simple organic beings "that  homologous units of any order become differentiated in proportion as their relations to incident forces become different" .  Our Lord and Savior Darwin rebuttals with "but as we have no facts to guide us, speculation on the subject [how differentiation of physiological labor arose]is almost useless".  Then in the very next sentence the Almighty Darwin makes a huge contradictory claim. "It is, however, an error to suppose [speculate] that there would be no struggle for existence , and, consequently, no natural selection, until many forms had been produced"  The Holy Saint of the Grail of Genes makes a speculation using his own theory right after he shuns his disciple Spencer for making speculations. This could be omitted, or even ignored if our Christ Darwin in all his glory didn't make this utterance at the end of the same paragraph, "no one ought to feel surprise at much remaining as yet unexplained on the origin of species, if we make due allowance for our profound ignorance on the mutual relations of the inhabitants of the world at the present time, and still more so during past ages".

Isn't that why we speculate?  because we don't know, but want to know.  We have a limited amount of knowledge about something and desire to know more, so we speculate about a possible answer, test it and see if the result survives the barrage of scrutiny that will undoubtedly come.  Weren't all laws and ideas we consider facts today at one point some person's speculation?  Newton's first law of physics was at one point just speculation, then after much testing and doubting; possibly some temporary abandonment, and of course centuries of effective implementation, we have agreed that it is no longer a speculation but a law.

Our All-knowing, Omniscient Darwin has just told us to NOT bother with speculation, except if it is with an idea he created.  That seems kinda haughty and self-righteous. That seems very God-like indeed.


What did I just do here?

I took some text, that is considered doctrine in its specific field, and I analyzed and criticized it.  The man who wrote it is a very well respected and esteemed person but ultimately no different than me or you.  What will happen to me now that I have done this?
Absolutely fucking nothing shit.  Possibly because the only person who will read this article is my brother Jonathan, WHADDUP BRO GRACEY JUICE FACE POWER!!!!!!!!!! BUT the point I wanna make is even if I was a respected scientist with a huge reputation to withhold in the same field of evolutionary biology, for the act of criticising the doctrine of my "faith" the worst that would happen is my colleagues would chastise and critique me with treatises demanding more evidence to support my claims.

If I criticized the bible, say...500 years ago; what would happen?

I would pay the price in full with my head........unless I was gay, then I would be turned upside down and sawed in half starting at my crotch.

If my description isn't vivid enough try this: 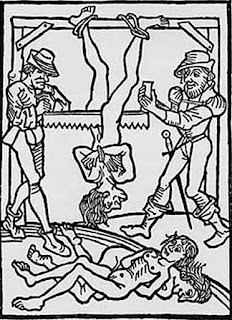 (don't let the happy faces fool you, I am sure this wasn't enjoyable)

You doubt the doctrine of the Church of Science, you are asked to prove what you say is true with evidence.

You doubted the mainstream church of mainstream God, you were killed.

After 100's of years of murders, mainstream religion eventually caught wind (probably from the sudden economic decline caused from killing so many tithe payers for acting on their natural curiosity to know and understand the world around them) of the inefficiency of their ways and adapted.  They eventually let people read the bible and develop their own personal relationship with it.  They even developed new ways of prayer where you could actually talk to God as if he was a human and ask him personal questions developing a personal relationship with him as well.  It seemed as the concept of humanity became more popular, mainstream religion had to adapt to remain successful.  But the only taboo that was never lifted was proving God wrong.  Nowadays our combined concern for the human well-being has allowed for honest questioning about what the bible and other mainstream religious texts say, but it doesn't matter.  You will eventually be wrong.  You can never disprove what Mainstream God says.  That one act has never been, and currently never will be allowed.  You can always question, but it is only allowed under the shared assumption that you will eventually see that you were wrong and M-God has been right all along.  In mainstream religion, there is no such thing as God being wrong.

In the religion of science, everyone is a God.  And therefore everyone can be wrong AND right.  How is that?  Because everyone has the right to question, disprove, and define the truth about the world around us.  This means that anyone, if so desired, can walk into the religion of science and question the currently accepted words of the collective God (us), prove them wrong, and in that process, make them better.  (of course this isn't as easy as I have explained it.  It could take your entire life to disprove anything that is currently accepted as scientific law but the key point is you can)

Why is this possible? Because the truth is just the accumulated results of many people's life's work, that have been filtered with the tests and scrutiny of their colleagues and proved useful in improving our general understanding of our mortal condition.  We (humans) have collectively discovered the truth together.  Therefore we (humans) have the right to doubt it and change it.  In fact it is more than a right, it is a necessity.  The only way our mortal condition can be improved is if we never blindly accept our current understanding and always question and find places that may be faulty; that could potentially be improved.  There are always places that are faulty because our current understanding will never be 100% correct.


Natural Selection says, concerning the law of extinction, that the use and disuse of something is what determines its organic longevity in the scope of evolutionary time.  Simply put, if we humans stopped using our eyes and still remained successful at living, eventually we would cease to have eyes.  The investment of energy in their development and maintenance would be directed elsewhere.

Of course you know what has been finding use with mainstream religion, but the why may have eluded you (by you I mean me).  In the religion of science to understand our mortal condition requires work.  Work that YOU (this time I mean you) have to perform.  You have to study it.  A lot.  An hour long chat with a scientist will be no where near enough time to understand.  But a minute long chat with a pastor/priest/bishop/anyone is all it would take for someone to believe  if a certain mainstream religion fit their concept of what our mortal condition was.  And mainstream religion has naturally evolved to fit this phenomenon.  There are a plethora of religions to choose from in your search for what fits you best because there are a plethora of people to choose them. So It simply boils down to our natural desire for comfort and convenience.  Science is not convenient, mainstream religion is.

There are of course lots of other reasons mainstream religion has withstood the selective pressures of time.  Some people use religion for social purposes, to increase business contacts etc.  The reason I used above is made under my definition of religion being when things congregate to understand our mortal condition.


Honestly, I have no catchy ending for this article.