Monogamy VS Polygamy VS Who cares 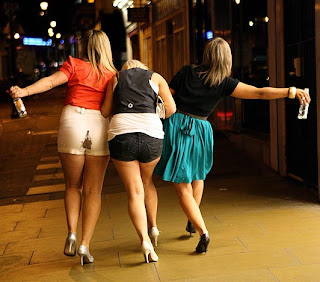 Monogamy and polygamy are social constructs.  Of course.  Some societies today as in the past practice one and forbid the other.  So........what?


The bulk of my social experience has taken place in societies predominately monogamous.  This means social practices that involve the dating, kissing, fucking, wedding, divorcing, and eventual stalking of more than one person at the same time are generally looked upon as bad; but that isn't to say it doesn't happen.

If I had more experience in a polygamous society I am certain mirror instances would appear.  It doesn't seem too far to imagine a woman married to a man who also has 5 other wives to find herself daydreaming of a life shared with only one man who gives her and only her his entire being.

So why, I ask, would cases of both polygamy and monogamy exist in a society that is predominately only one?

I think it is because we see society incorrectly.

We are looking at society as a group of like minded individuals, who are that way because they all had the same general upbringing which impregnated them with a similar state of mind.

Let's make a couple adjustments to this sentence:

We should be looking at society as humans, who are that way because they had the same general upbringing which impregnated them with a similar state of mind.

We never inquisitively gaze upon a male dog as it humps one female after the other and wonder why.  They are just dogs!!!!!

I choose the social dichotomies of polygamy and monogamy to illustrate that, under the misunderstood complexities of the human mind, there is no contradiction in them at all.  This can be applied to all other seemingly conflictive human actions that plague us, e.g. killing vs loving, selfish vs selfless, blah blah fuckin blah

If you view humans as a society on a morally equal level as our other animal friends, then why can't we....just be human.

We are all trying to do the same thing : figure ourselves out sexually, emotionally, and mentally, its just most other animals aren't capable of knowing this.  This makes being human an extra difficult task.  Other animals don't have our goddamned overly developed, self consciously complicated mind that keeps questioning everything we do causing some of us to say "TO HELL WITH IT!!!" and with a knife to the wrist, or gun to the brain, or gravity of a falling body to the pavement, send themselves to hell, which happens to be a construct of our goddamned overly developed, self consciously complicated mind.

When other animals shit, they just shit.  They don't turn around and take pictures of it, post it on FB and wonder how many more it will take before their account gets banned.

When other animals eat, they just eat.  They don't eat....and then hate themselves for eating.

When other animals kill, they just kill.  They don't covet their best friend's GF throughout all of high school, but somehow maintain a relationship with them both without belying the secret lust that keeps boiling, a lust that gives way to murderous thoughts that were once never conceived as possible until that moment when everything is in place and all that is needed is knife to his throat.

And when other animals fuck, they just fuck.  They don't get drunk from living such a stressful life and wake up 5 hours later to some guy sucking his dick and actually enjoying this more than fucking his own wife, but continue to live this life of forbidden love in secrecy from fear of the almost certain social murder that would ensue if it was exposed.

See how much more complicated we make things?  It isn't because we LIKE to make it complicated.  It is simply because being human is hard shit.  We are still figuring it out.

So, while we are still figuring shit out, why don't we adopt a more relax moral system, a moral system more similar to our animal counterparts.  If you actually break it down, how much different is a society of pigs in their natural habitat to a society of humans in their theirs?  Have pigs developed some sort of post-apocalyptic society from randomly killing themselves due to no law punishing the act of murder?  If life as a pig was just one eternal ungoverned orgy producing illegitimate bastards left and right why have they not infested and conquered the world yet?    Have I made my goddamn point?  Magically, in what seems to be complete chaos that is the animal kingdom, an equally magical order has arisen, an order that keeps shit under control.  Why is that?  Because pigs as humans are just trying to figure shit out.  When you get a group of shit together that has a shared goal, of course random shit happens due to consequences of our innate ignorance, but order will arise because the shit all wants the same shit.  That is why we classified the shit into societies.

Despite our minds being goddamned overly developed, self consciously complicated, they actually can be of an advantage to us.  We can use them to expedite this goal of figuring ourselves out.  Since our minds allow us the ability to make subjective choices, in the case of this article, we shouldn't look at polygamy and monogamy as two alternative ultimatums, but as two alternative choices.  ultimatums vs choices.  Totally different.  The former entails only one option - which is stupid.  The latter entails whatever option best fits our situation - which is human.  If you are trying to figure out what kind of woman you like, than its a numbers game.  getting to know as many woman in the shortest amount of time would award a motivated man with a thinking brain the ultimate prize.  Polygamous dating is the only sound option.  Now lets say you have your ideal woman figured out, maybe its time to dedicate more time to your mind, to your goals, to your dreams, well the inescapable desire for attention will not magically disappear while you focus on yourself, so maybe it is a good idea to find this ideal woman that can keep you happy the longest and live a life of monogamy while you develop other parts of being human.

Against every natural urge we have to segregate and classify, we must maintain a human point of view when we address moral issues about society.  Why?  I guess because we are all humans.  Maybe we should first figure out what it is to be human before we decide what it is to be Mexican, or Korean, or a pervert, or a man.
Posted by curiousity at 5:46 AM