We need others because we lie to ourselves

This is a post to elaborate on a theory I have been developing for quite some time based on some new evidence.

As we enter the age of information, the understanding of our identity will become increasingly more dependent on information we receive from others.

Chapter six from the book The Mind's Past  by Michael S. Gazzaniga.

The chapter in question is titled "Real Memories, Phony Memories" and as the name implies after we experience something, occasionally as our mind tries to recall these experiences it will create phony memories of the events that actually took place.

In the book Gazzaniga refers to the device in our brain that is to blame for these phony memories as "the interpreter".  According to Gazzaniga this device is located in the left hemisphere in our brain, or more specifically at the tail end of the brain's ventral stream - one of the two streams that make up the two-streams hypothesis of how our vision processes neural data.  To give a quick summary of this hypothesis, when a piece of data enters our visual system from the outside world via our eyes, this data undergoes a dissection process where some of it goes towards our temporal lobe via the ventral stream and is encoded for what this piece of data is; while the other part of the data goes to our parietal lobe via the dorsal stream where is it encoded for where this piece of data is located in relation to the observer. 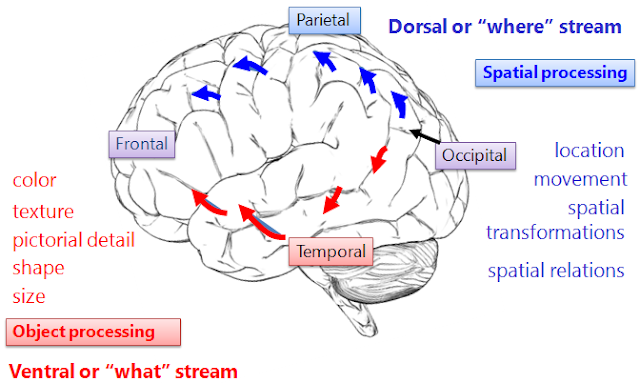 When we observe an object, whatever it may actually be, our interpreter encodes the data from our eyes regarding what the object is according to our unique historical perspective of the world.  If the object is very common, meaning everyone we know most likely has some experience with it, then what the object is encoded to be in our mind will likely be similar to that of everyone else.  However, if the object is very unique, very rare, very vague, then the shape of what is perceived by each individual is likely to vary.  This is because the data that the interpreter uses to make sense an object we perceive is limited to our historical relationship with the object or relationship with objects that have the potential to be similar.  The interpreter serves the function of filling in the gaps of what an object may or may not be in our mind.  Occasionally, however, the experiential data the interpreter uses to fill in these gaps is not always accurate to what the object actually is.  In other words, our brain will lie to us for the sake of filling in the gaps of the unknown.  This is where my theory comes into use.

Since every single human has a unique experience-based relationship with this world and all the objects located therein, every individual human perspective of the world with all its wonderful objects will be unique.  The degree of unique will scale up or down according to the pervasiveness of the objects with which humans have experience. The more common objects will have a lesser degree of variation of perspective among individual humans while the more rare objects will have a higher degree of individual perspective variation.  A reasonable sequitur for this logic is that if an individual would like to better understand the shape of these rarer objects it would be wise to elicit the perspectives of as many other individuals as possible.  The more diverse number of perspectives one can get concerning the shape of a lesser known object means the less one would need to rely on the fallacious nature of their brain's "interpreter" to come up with a explanation.

I see no object greater in ambiguity and singularity than one's identity.  To the same extent that one's experiential relationship with the world is unique, so is one's experiential relationship with oneself.  Despite our tendencies and desires to claim that we know ourselves, the fact of the matter is our identity is unique, and as such, it ranks as one of the lesser known objects of this world.  Therefore the same sequitur from above applies here.  If we would like to understand our identity, it would be much more advantageous to elicit (and believe) the perspectives of as many people as our sanity will permit, than to rely solely on the fallacious nature of our brain's "interpreter".
Posted by curiousity at 8:38 AM