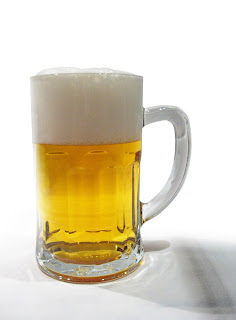 My sacred beer mug is within screaming distance from me and I will never see it again.


This little morsel of hell is the backdrop to a much greater hell that is my current living circumstance which in turn is a door leading to a deep evil society rooted in making finely raised folk defecators of all things celestial.

I currently live in a dormitory for a local college.

I NOT being a student and also NOT being Korean kinda makes I stand out.  "Stand out" has a very unique meaning here.  It means no one talks to me or engages in eye contact...except for this exchange student from Thailand who randomly knocks on my door because he can't believe it is not my cigarette smoke he smells every night.

The other morsels of hell that I alluded to above come in many forms, of the which I will show one. 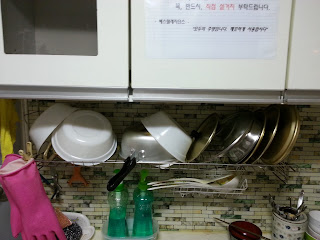 Let me direct your eyes to the middle section with the hanging rack used to dry your dishes.  What you see here is complete idiocy.  The arrangement of dishes on this rack is done by only the most moronic of individuals. (Which I assume is every single person in this dorm because this is the set up that greets me every morning and night).  Anyone with even the slightest idea of practicality and consideration would never allow such backwards thinking to flourish.  What you see here are dishes placed in such a way that it completely destroys the purpose of the device on which they lay.  The hanging rack IS for 2 simple reasons : to accommodate more space in an otherwise cramped surrounding, and to allow for dishes to be positioned for expedited drying.  Both these purposes are being pissed on by the ignorant minds of people who still drink the milk from their mum's tit.

If you notice to the right, there are roughly 6 dishes placed in such a way that perfectly utilizes the 2 purposes previously explained and that the rest of the space is being occupied by the same amount of dishes.  They are taking up nearly 2/3's more space while maintaining the same goal.  And on top of this the position of the space wasting dishes will cause them to dry much slower.  The level of stupidity behind the minds that created this is astounding.

It reminds me of people who do this: 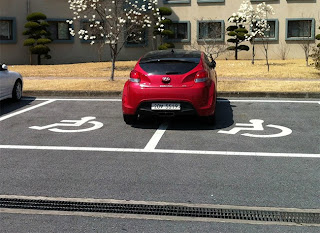 It is an cross-cultural epidemic of moronic magnates.

In a couple of seconds I transformed the problem into this: 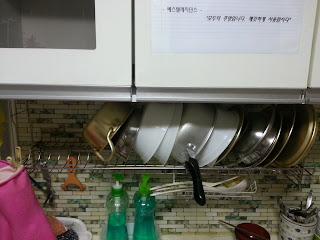 It allowed me to put my dishes up to dry as so: 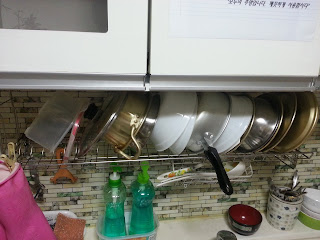 There is still room on that rack to allow for a variety of objects to dry: 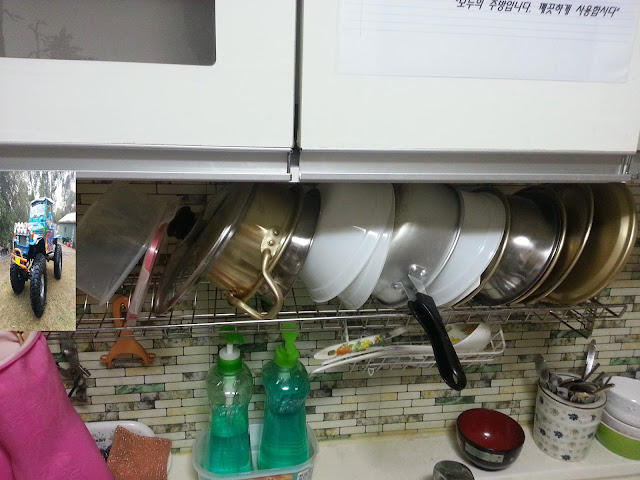 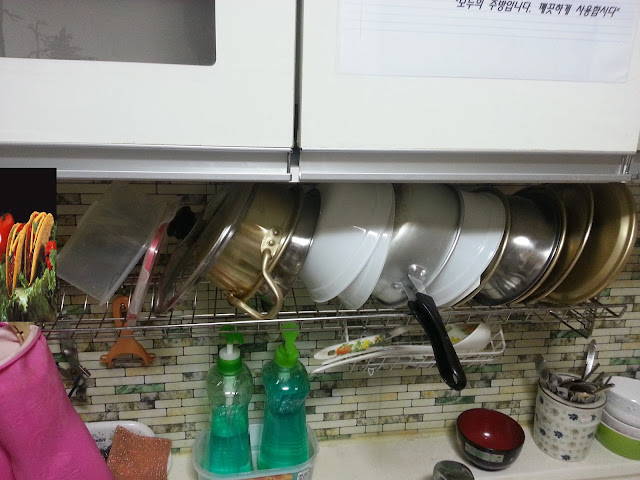 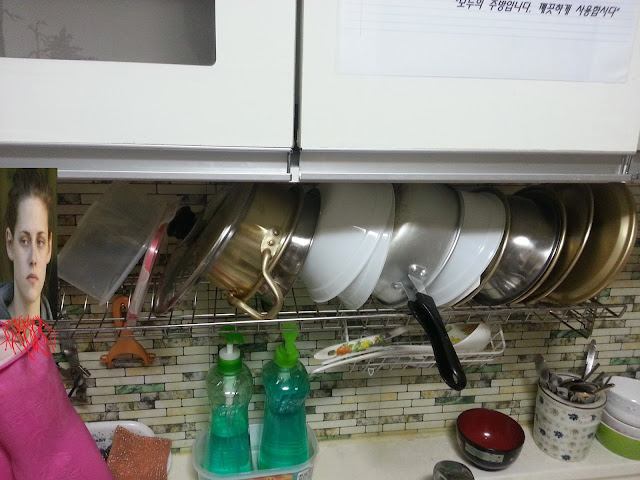 Such simple moves that save a ton of space.....HOW COULD THIS NOT CROSS SOMEONE'S MIND!!!!!  ESPECIALLY PEOPLE WHO LIVE IN SUCH SPACE-DEPRIVED QUARTERS AS MINE!!!!!!

I live in such small quarters that I can be laying in my bed, full on lay, 100% sleep inducing lay, and by simply rolling over on my side, I am pissing into my toilet. (As illustrated by the following picture.) 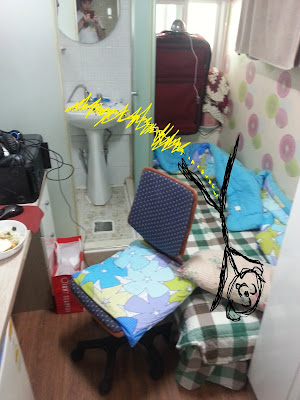 But Alas I feel I have derailed from the initial topic of this post : my sacred mug.

When I say I am in screaming distance from it; I mean it literally: 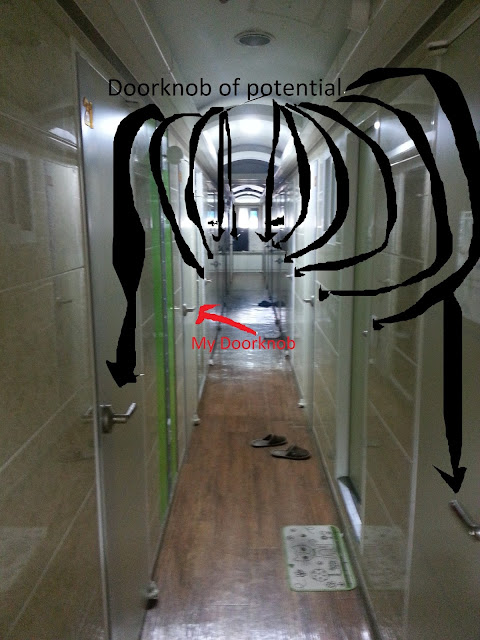 (my photoshop skills are impressive right?)

The environment naturally allows for my beer mug to be taken without deeming it a theft under any civil law hither-to installed by man.

For this I need to give you a little background on Korean culture.

ummmm......I think I will end here.  My point I hope is understood.

Being that these traits are common among most Koreans, society has adapted to them.  One form of this adaptation is where I call currently live.  The closest English term to describe where I live is "dormitory", but the actual conditions shared with it end with "a bunch of college students who live together".  The word in Korean is "Goshiwon" and how it differs from a dorm is distinct and far.  A goshiwon is a location that sprouted in reaction to the parent-sucking culture I described above.  A goshiwon is a place that tries to aid in the transitional struggles Korean Kollege Kids encounter when they move away from their home for the first time in their life.  The way in which a goshiwon does this is by offering certain amenities not normally offered at a college dormitory.  These include all you can eat rice, kimchi, and ramen, free laundry detergent, wake up calls, and private bathrooms (so intra-personal encounters are limited to the occasional glance in a hall-way).

What this has also created indirectly is a generation of children completely incapable of dealing with social situations....but that is a point for another time.

I was quite happy taking advantage of all these extra perks.  I saved money on rice, I had an endless supply of kimchi, I didn't have to buy detergent....many things life forces onto a responsible individual were temporarily lifted and the absence of the weight was quite thoroughly enjoyed by me. (this last sentence is such torture to read it makes my heart sing angelically)  This joy was enjoyed for about a week before an array of unpleasant instances started to glare their evil eye at me.  Moments that had previously taught me why I hated living with people.  Occurrences that only enforced my already deep-seeded hatred towards the general populous.  One of them I had already expressed above and the other was communicated with the mug-napping of my favorite drink facilitator.  The latter I regretfully reiterate was the fault of no one.  You see I knew that under the special conditions of where I lived, my belongings if left unsupervised, could become victims of various heinous crimes, so as such I came prepared to prevent them.  I bought a towel that I would use to dry all cutlery and dishware of mine so that I would not have to leave it vulnerable on the floating dish rack previously shown in a series of photos.  But being a semi-idiot that I am, I bought a towel quite unfit for the task of drying.  Whenever I dried any piece of my eateries, it would leave a film of flaky dust on the surface, rendering my utensils completely useless.  Upon realizing this I made it a goal to venture into the dreary world and find a cloth capable of the task I desired.  During this time, laziness befell me and I decided to leave my precious beer mug out to dry on the public dish rack.  I was only expecting a 2-3 hour hiatus while it dried but during this time someone had come upon my mug, and being a mug of such superior quality, the thief quickly procured it for his personal benefit.  I, being a man with an everlasting faith in humanity, believed that this perpetrator would eventually return the mug to the location of its seizure.  This thought was additionally supported by the very culturally implemented conditions of where I lived.  But Alas, after 2 weeks of faithful endurance, my soul doth weep as I end this blog entry, fill my pockets with despair and 2000 Korean won, and venture out into the same dreary world from whence I came before this whole fiasco transpired, to buy myself a replica of said beer mug that will certainly please me as the one now lost did.

Amen.
Posted by curiousity at 5:01 AM